Ginger is having a bit of a spring clean, and is auctioning off his Silvertone Apocalypse Pro guitar, used to record the “Wildhearts Live In The Studio DVD”, and the self-titled White Album.

Check out this beauty on eBay here. 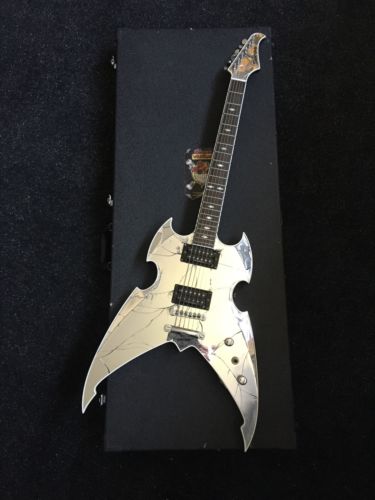 We also have lyric sheet to Caffeine Bomb, hand written and signed by Ginger himself up for grabs on eBay here.

But be quick – bidding for both of these items ends this weekend!

Ginger’s Schecter Hellraiser “Chutzpah!” Guitar, Could Be Yours!

Ginger is selling his dark red sunburst Schecter Hellraiser Solo-6 guitar – the very guitar used in the writing and recording of Chutzpah! and Chutzpah! Jnr, and played during the Chutzpah! tour and more recent Wildhearts tours.

Extensively customised through his trademark application of stickers and decals, this is a chance to own a one-off piece of rock history.

Ginger says:
“When Chutzpah! came out, to roaring reviews, most people complimented us on the guitar sound. Even live, people would delight in the fact that we had a modern edge, and it was all down to this thing before you.

This beautiful guitar was responsible for the writing and recording of Chutzpah! and Chutzpah! Jnr, and the world tour that followed.

Of course it didn’t retire there, as I played it, almost exclusively, for many volume packed years, as my go-to guitar. Perfect tone, insanely good tuning (I never owned a tuner in the years I played this one live) and now covered in stickers from all round the world.

On opening up the box there was even an original tour set list, so as an added bonus I’ll chuck in some personal items from the time. Just bits and pieces from that period in Wildheart’s history.

But the main draw, obviously, is this sublime piece of our story. The Chutzpah! guitar.

It is being auctioned from Ginger’s official eBay page at www.ebay.co.uk/itm/Ginger-Wildhearts-Schecter-Hellraiser-Solo-6-guitar-dark-red-sunburst-colour/292226690419. You can see the details about the guitar and shipping details on the listing page.

Check it out in action playing Mazel Tov Cocktail on stage during the 2009 Chutzpah! tour (this was before it was stickered up),
on YouTube here.

The auction will run until Monday 4th September – let’s find this a good home! 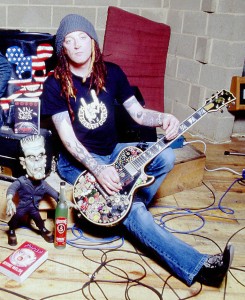 The guitar broke the £5,000 reserve shortly after the auction was posted, climbing steadily throughout the week, before a flurry of late bidding and counter-bidding took the total to an impressive £17,000 which will go to help those in desperate need throughout the world.

In thanks to the winning bidder – an incredibly generous Japanese fan from Sendai – and to all those who helped to spread the word, Ginger Tweeted:

“SEVENTEEN FUCKING THOUSAND POUNDS!”,”I am the luckiest motherfucker out there. I’m in LOVE with you lot. You are fucking edible. Thank you. x”

before the following statement was issued:

“I feel proud to feel this connected to my supporters. I’m a very lucky guy. The money from the guitar will mean more to some than the memories mean to me. Often we have to give things away to get things in life, and in this case I’ll be receiving the gift of helping someone less fortunate than myself.”

Rock memorabilia collectors now have the chance to get their hands on something very special!

Ginger’s famous, one-of-a-kind stickered Gibson Les Paul is being auctioned to raise money in aid of the British Red Cross.

Says Ginger, “Released in 1978 to commemorate the 25th anniversary of the Gibson Les Paul, I bought this guitar around 1987 when I was asked to join New York rockers The Throbs. After a short term in NYC the guitar came back to England with me to form The Wildhearts. I formed the band and recorded every Wildhearts album with this guitar (also Silver Ginger 5 ‘Black Leather Mojo’, Supershit 666 and multiple solo projects). This fine guitar acted as my main guitar on every tour The Wildhearts ever did, including the AC/DC ‘Ballbreaker’ tour, as well as appearances with Sex Pistols, Manic Street Preachers, and many more. And it rarely needed tuning onstage. Basically if you ever saw The Wildhearts I was playing this guitar and if you ever heard The Wildhearts then you were listening this guitar. Every song was written, played and recorded with this instrument. THIS is history.”

Any questions regarding the guitar can be addressed directly to Ginger via his Formspring account.

Sign up here for the latest news, straight to your inbox!